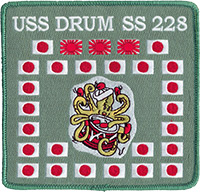 As you visit each war patrol report, note that there is a button on the upper-right of each report that says "Click here to return to the War Patrols index". If you click on that button, you will be brought back to this page where you can choose another war patrol report to read. At the bottom of each report you will see three navigational links as well: previous patrol, back to the top of the current patrol, or next patrol.

While I have done my best to reproduce these reports by eye, hand, and keyboard, error is possible and likely. In addition, some letters, numbers, sketches, etc. were illegible on my copies of the original reports. Blame the ancient microfiche! Whenever I could not determine a letter or number, you will see a "?" in its place. There are more after-the-fact details written in each patrol, and I am not including that information, at least at this time. I encourage you to attain your own copy of the original war patrol reports if you desire further information.

You can use the custom Google search box below to search the entire Drum228.org website, including all of the war patrol reports.

* UNOFFICIAL The 14th war patrol was unofficial, as the war ended just days before Drum could reach station at Saipan.

The Drum sank an official JANAC total of 80,580 tons (15 ships) of Japanese shipping, or an estimated wartime total of 118,000 tons (19 ships) of Japanese shipping. The crew even claimed to have sunk 27 vessels - you can see 26 of these claimed kills represented on their "kill flag" on your right. It was normal of estimated wartime totals to be greater than the JANAC confirmed totals as numerous times the submarines could not stay and confirm the sinking of their targets. Regardless, the USS Drum ranks within the top 10 (eighth highest) of all American submarines in terms of total tonnage sunk during WWII, and she is only one of two submarines in this top 10 list that still remains today as a museum.

If you find these reports useful or informative, please do something to help the Drum. 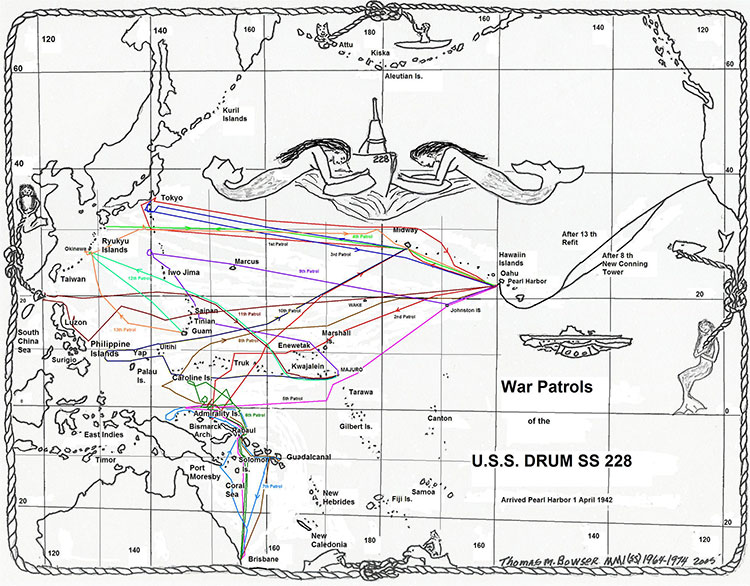