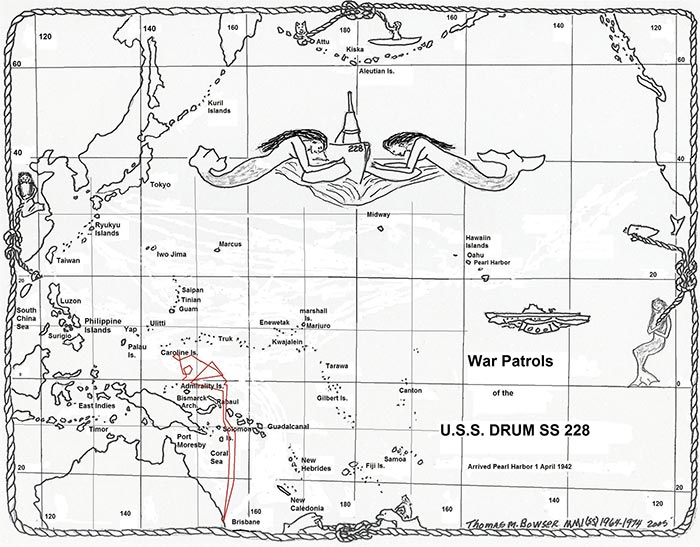 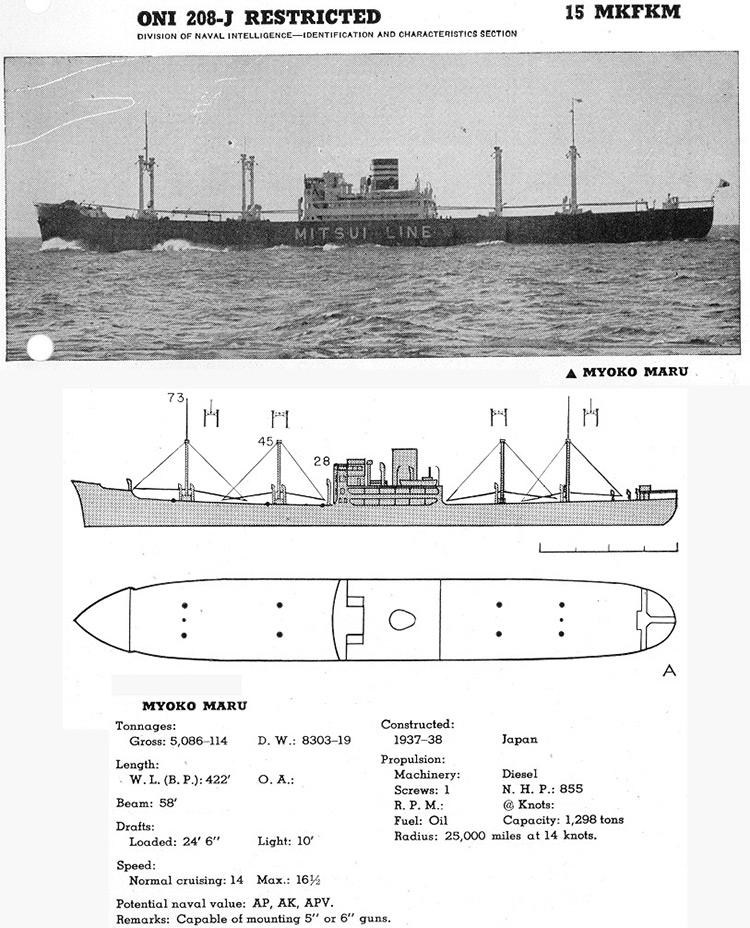 The weather during the entire time in area bounded by 2° S. to 4° N. and 146° E. to 154° E. was unfavorable for submerged attack. The unfavorable conditions included; calm to glassy seas, little or no wind, frequent rain squalls with attendant poor visibility, and partly cloudy skies. The barometer was steady at 29.76. On one, and only one, day out of thirty-three, was there a semblance of whitecaps.

In the area, westward of the Solomon Islands, from 10° S. to the pass between New Ireland and Buka, currents of 1.0 to 1.5 knots setting southeasterly were encountered.

The turn counts listed in contacts #1, #4, and #6 are considered reliable, as are the accompanying speeds. They are all the results of prolonged tracking.

The first speed and turn count is for a freighter similar to "Kyusyu Maru", 8666 tons; the second for a large tanker; and the third for a 4000 to 5000 ton MFM freighter.

Two freighters and one destroyer in convoy. Destroyer patrolling across track astern. Larger freighter (KKFKK) similar to Kyusys Maru (8666 tons) attacked with four torpedoes. Smaller freighter (MMF) (6500 tons) was on starboard bow of larger one. Contact made by sighting on surface in good visibility with squally background after Drum. Tracked by SJ radar in varying visibility at ranges of 13,500 to 21,300 yards. Dove ahead of convoy at dawn and made submerged attack with stern tubes.

Hearing 3 torpedo hits and ship breaking up, with compartments collapsing. The noises were the same as those heard during a sinking witnessed on the fifth patrol.

Tracked with TDC at 9 knots (95 RPM) perfectly. Target zigzagging from 170°(T) to 210°(T) in three to five minute legs. Fired with periscope bearings being fed into TDC before each shot. Spread set using offset dials - 5°L, 2°L, 2°R, 5°R. Sound man heard all torpedoes running to the target. The target's screws stopped immediately after the three torpedo explosions; while the screws of the second ship and destroyer were still heard.

This mine was spherical, about three feet in diameter, and mounted four or five contact horns. No antennae were visible.

The detonation threw a shrapnel splinter about 200 yards, and produced a geyser about 100 feet high.

1. The convoy of Attack No. 1 was formed with the leading ship about 1000 yards on the starboard bow of the second, and larger freighter; and was zigzagging by simultaneous ship movements in three to five minute legs. The destroyer was making 13-14 knots (160 RPM), and was patrolling across the track of the convoy about 1500 yards astern of the second ship. He had three anti-aircraft guns manned, all pointing skyward.

The approach was conducted in such a manner that the target was, in general, between the destroyer and the Drum. Thus, the three torpedo explosions were the first indications of the Drum's presence.

Without slowing to less than 200 RPM the destroyer made two effective passes, dropping three charges six minutes after firing, not close; and a minute later dropping six more close astern, jarring the boat considerably, but causing no damage. The destroyer did not use echo ranging at any time.

The freighters were in a constantly changing formation with the largest leading, and the other three loosely grouped astern. The ships zigged radically and apparently independently. In the early stages of the approach, both starboard and port angles on the bow were observed, changing frequently. The escorts were stationed ahead, astern and on the port quarter of the formation. Only the leading escort was echo ranging. He searched on 17 kilocycles continuously, employing automatic keying with an 8 second interval. Three hours after the convoy passed two planes were observed over the formation, though they were never observed during the approach.

Though the actions of the escorts in no way indicated the detection of the Drum, the "turn-away" of the convoy and the possible resumption of its former course five hours later may have been the execution of the standard Japanese convoy policy.

One exploder, #4076, was found completely flooded. This occurred when the torpedo was subjected to a depth of about 110 feet; which depth was reached (as the boat went deep) before the forward tubes were all secured.

Prior to the time the boat went deep the tubes were ready five minutes. The magnetic feature of the exploder was made inoperative and the exploder reinstalled. The torpedo was not fired.

Several leaks in the exhaust risers developed indicating the system is generally eroded and lines in need of renewing. On one occasion a main engine exhaust valve failed to open completely necessitating adjustment of operating shaft. A plague of erratic governors occurred during which several engines "hunted" at all speeds. Adjustments were made and springs renewed to overcome this defect. On diving, July 1, 1943, #2 Aux. engine refused to stop in spite of emergency air and hand stop operation. The fuel racks were sticking. A request has been submitted to install a means of stopping the engines by cutting off the air supply. Such an installation is provided for "Winton" engines.

Port main motor 75% field interlock failed to function putting the port shaft out of commission. This casualty has occurred on three previous patrols.

The starboard stern tube still leaks excessively. This is caused by misalignment, for repacking failed to decrease the leakage in the slightest. Once again the reduction gear lub oil system became emulsified due to salt water leakage into the port sump tank. This occurred on three previous patrols.

The bridge throat microphone box flooded five times, before it was discovered that the cause was a combination of oversized gasket and oversized stuffing box.

Continued low capacity was corrected by installing proper shunt field rheostats. Oil and vapor seal rings leaked continuously until all on board spares were used. On June 15, 1943 a major derangement occurred in the starboard unit. The unit had been getting progressively noisier until it was shut down and dismantled. The assembly was found to be misaligned and the taper pins used to lock the impeller drive shaft gear on the shaft were loose and allowing the lobes to strike each other. Both lobes and both gears had to be renewed. This latter casualty is attributed to inferior tender overhaul.

Radio reception was good. All serials sent on the Belconnen schedules were received. The high frequency, however, proved much more satisfactory than the low.

Transmission ont he 4235 kilocycle series was successful to NPM and to several Australian stations.

NPM's 16.68 kilocycle transmissions could be heard, but not copied, while on the surface; and were never heard while submerged.

Reception on the periscope antenna at 50 feet was successful on 7105 kilocycles during the search for the RAAF flyers.

The operation of the SD was satisfactory throughout the patrol. One contact was made in the area at 12 miles; and several contacts during the search for the life raft on July 20, 1943.

The radar mast again failed to function properly. It refused to lower while the ship dived. This is the third successive patrol on which this casualty has repeatedly occurred.

The trouble has been attributed, at various times, to: (1) uneven hoisting cables; (2) improperly functioning limit and slack wire switches; (3) misalignment of bearings; and (4) a bent mast. During this refit the mast should be pulled and completely overhauled.

A new range record is claimed for the SJ radar. Bearings and ranges up to 21,300 yards were obtained on an 8666 ton freighter which were accurate enough to be plotted during the tracking of the target.

The operation of the radar was highly satisfactory, although the blower motors again caused some visual interference on the screen, and had to be overhauled periodically.

Remarkable sound reception was experienced in the area near the equator between 150° E. and 146° E. Echo ranging was heard at about 38,000 yards and screws at about 29,000 yards during one approach. The sea was glassy during this approach. Bearings of echo ranging were obtained 30 degrees in error, when the pinging was deflected from a rain squall. Fish groans and squeaks produced the majority of the noise interference encountered during the patrol.

The bathythermograph installed during the last refit, operated satisfactorily.

One definite density layer was noted at Lat. 2-03.0 S., Long. 153-44.0 E., in the early morning hours. A decrease in temperature of five degrees occurred between 150 and 250 feet. During the depth charge attack at this time, the destroyer made but two effective passes, maintaining good contact only about ten minutes.

The health of the crew was slightly below the usual standard. Besides several severe colds, there were three mild cases of "Vincent's Angina" which were prevented from spreading by the prompt action of the pharmacist's mate.

The quality of the food obtained from the FULTON in Brisbane was definitely below par. Even a small quantity of fresh frozen foods would have enlivened an otherwise drab bill of fare.

By spreading about one can of CO2 absorbent on each all day dive, the boat was kept comfortable at all times. The air conditioning system functioned extremely well, producing about 200 gallons of water daily. A means of "sweetening" this water by filtering would be highly desirable.

The performance of the crew was commendable during the entire patrol. The morale and the state of training are high.

The failure of the port field interlock on June 8, 1943 left the port screw inoperative until the interlock was tripped out by hand. This is the fourth successive patrol on which this casualty has occurred.

The Commanding Officer cannot stress too strongly the military hazard of the inherent defect, and again recommends that a factory representative be consulted to determine the cause and remedy. The action of the convoy on July 14, 1943, in radically changing course away indicates that the Drum was sighted although no plane escort was seen until two hours afterward, and the escorts made no attack on us. The range at the time of course change was five to six thousand yards, too great a range for the ships to sight us although the sea was glassy. The escort gave two prolonged dashes on echo ranging about the time of course change. A successful attack still could have been made at long range if the Commanding Officer had realized it was a change in the base course rather than a zig away.

Attack restrictions south of 4° S. were received during the patrol. It is recommended that they be lifted for boats between Buka and New Ireland. This area is usually traversed at night when identification, except by challenge, is impossible. If our forces are in the area the submarine could be so notified.

The system of training developed by Commander TF-72 is realistic. The Commanding Officer feels that, in a shorter time, a great deal more is accomplished than at Pearl Harbor.