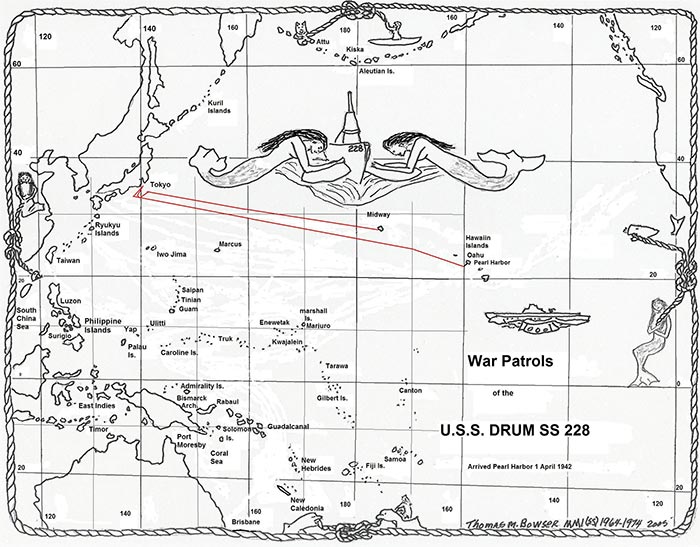 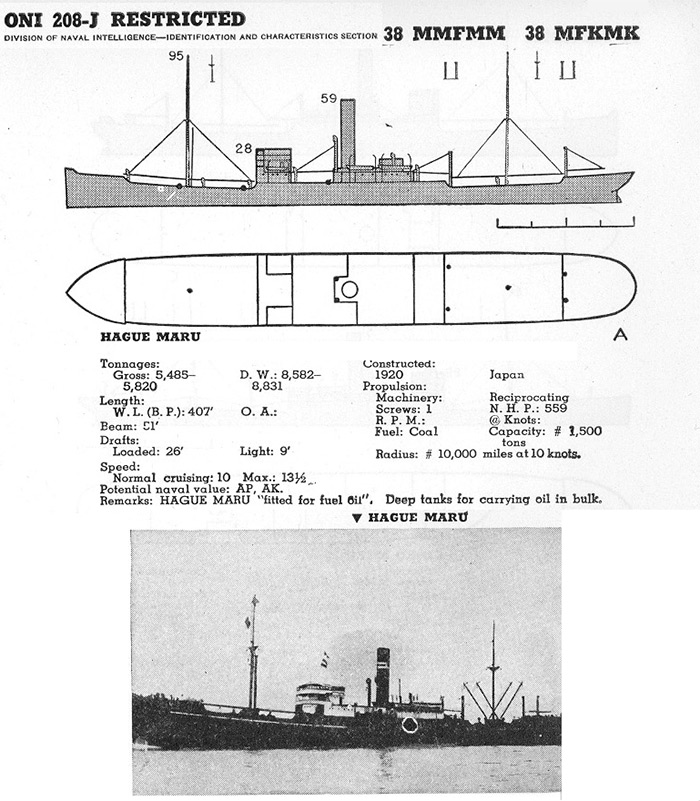 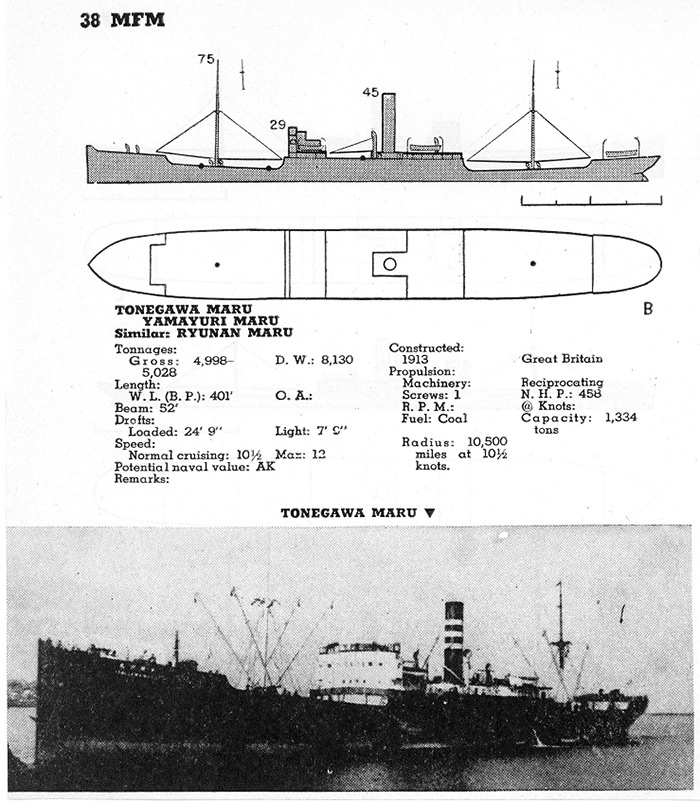 (1.) Narrative (All times are INTER unless otherwise labeled)

Weather enroute to station and while in the area was generally excellent. On the return trip the seas were generally rough and on two days, October 30 and 31, the heavy seas cut speed to 6 knots for about 40 hours. Three days were lost on station because of seas too heavy in which to conduct a periscope patrol, and two days were lost due to poor visibility. Visibility along the coast between Miki Saki and Shiono Misaki was usually hampered by a hazy atmosphere. Winds were generally NW or NE, average force 3.

(a) Shiono Misaki - not sighted from less than 10 miles distant on the surface.

(g) Nojima Saki - not sighted from seven miles distant on the surface. The lighthouse has apparently been rebuilt since the Drum's first patrol in this area in May 1942. At that time Nojima Saki lighthouse was a green-brown, squatty tower and now is a tall, white lighthouse.

The SD radar was invaluable in navigating at night. The high grade sextant was used to fix the night position with good results.

1(a) This was the first of three almost simultaneous attacks. Visual observation of torpedo runs was impracticable because I was busy setting up to fire at two more targets. Sound tracked both torpedoes to the target. The approach had been deliberate and long, and there is no room for doubt that the target course used was absolutely correct, and that the estimated speed was very nearly so. The same fire control data used on the second ship (1(b)) produced a hit 100 feet abaft MOT. Considering offset angles used on these two firings, attack 1(a) should have produced one hit 70 feet forward of MOT and one 20 feet forward of MOT. I am convinced that both these torpedoes passed under the target.

1(b) This ship was hit abaft her stack. She immediately listed to port, began to settle by the stern, afire aft, and undoubtedly sank. She was similar to Koyada Maru (5337 tons).

1(c) This ship had become alarmed before we were able to shoot at her, and succeeded in turning to avoid torpedoes.

The original attack consisted of two torpedoes. A violent explosion occurred 32 seconds after firing the first. This explosion completely obscured the target for about ten seconds; but when the geyser subsided, the target was turning away and shooting her gun. The premature explosion of #1 torpedo probably affected the run of #2, following seven seconds behind. A third torpedo fired at a range of 2200 yards on a 180° track hit with devastating effect. She was literally spun around to port, and sank within 90 seconds, her disappearance followed by another violent explosion. She was similar to Lyons Maru (7000 tons).

The first torpedo exploded prematurely 30 seconds after firing. The second, 7 seconds behind the first, missed. The target maneuvered after explosion, and another calculated attack was impossible due to failing visibility and background conditions.

4(a) First ship was hit dead amidships by first torpedo and began settling rapidly. When last seen her weather deck was well awash, and she undoubtedly sank. She was similar to London Maru (7200 tons).

4(b) This attack was made on the second ship just before she started to maneuver to let both torpedoes pass ahead.

This attack was delivered from perfect position on a target which had been allowed to "come on" for fifteen minutes. No approach ever has been made more deliberately, nor checked along more exactly. We literally sat, dead in the water (with an occasional kick at 1/3 speed to ensure depth control) - and clocked the angle on the bow frequently from 10° to 90°. The estimated course was exact; the estimated speed almost as certainly correct. So sure was I of this attack that I almost fired only one torpedo. I watched the smoke of the first two torpedoes pass under the mainmast and close under the stern respectively, which should have produced hits at points just forward of the MOT and just abaft of the MOT. Neither exploded. Forty-nine seconds after being fired, the third torpedo produced an explosion in line with MOT, and a geyser of water and light smoke which disappeared in a few seconds. Small bright bits of metal flashed out of this explosion - and the explosion was markedly weaker than any war head we have heard. The only explanation which comes to mind is that it was an air flask explosion. At any rate the target turned, apparently quite unharmed, and maneuvered radically. Fourth torpedo missed.

This approach was made in the presence of numerous small craft, some very close aboard, so that periscope exposures were short. Position attained was considered very good, and fire control data good. Torpedoes were fired almost under the forefoot of another steamer, and we had to go deep just after firing. The fourth torpedo hit. When last seen, the target was dead in the water, listed well to port, and had settled by the stern. It is considered almost certain that she sank. She was similar to the Koryu Maru (6700 tons).

Nothing new. Anti-submarine activity was notably less vigorous and less effective than that encountered here five months ago.

Material performance was excellent throughout, evidence of a fine job of overhaul by the FULTON at Midway.

Port stern tube and shaft - The port stern tube stuffing box leaked excessively during the last patrol and could not be stopped. During the refit period, September 2-23, examination by the U.S.S. FULTON repair unit revealed the following: (a) the shaft at the stern tube had an eccentricity of .007" (b) the coupling studs had been incorrectly assembled causing a whip or misalignment between the driving and driven couplings. The FULTON reduced the eccentricity, manufactured body bound bolts which were installed in the coupling, and packed the shaft with 5 rings of flax packing. Enroute to the area the stern tube bearing gland and shaft ran hot. This was caused by the stoppage of all cooling water leaking past the packing rings. The shaft was repacked 4 times in 5 days at sea and each time the #5 or outboard ring showed definite indications of turning. This turning may be attributed to grooves in the shaft caused by previous lead packing and eccentricity of the shaft with the gland. The final packing consisted of #5 ring lead packing, the other 4 rings flax packing. After being run in for a considerable period the port shaft and stern tube bearing settled down and at present there is a appreciable difference in temperature between the port and starboard shafts. It is considered that the port shaft is satisfactory now, and no special repair work is recommended. However, at the next dry docking of the Drum the port shaft and stern tube bearing should be aligned, and the grooves in the shaft removed.

"B" Radio, Sound, and Radar

During the first depth charge attack the radio antenna trunk flooded. This same defect was experienced last patrol, and the leakage was found to be due to a damaged insulator.

Radio reception was complete at all times.

Sound conditions along the southeastern coast of Japan were poor.

There were no definite density layers observed.

The health of the crew, except for a few colds, was excellent. The habitability was excellent also. During submerged operations the following meal hours were observed:

The food was very good and well prepared.

(16.) This patrol was brought to an end by the virtual expenditure of torpedoes.

Four days of this patrol were spent off Mikura Shima in the hope that there we might encounter men-of-war bound between Yokosuka and the Solomons. Other submarines enroute have seen important ships in this locality. Our time there produced only one sighting - a small freighter.

On previous patrols it had been impossible to keep paint on the periscopes. Prior to this cruise, the FULTON etched the periscopes, and the paint adhered perfectly.

No one likes to blame his tools. I cannot but feel that we accomplished only half of what we earned, and even a smaller fraction of what we were capable of doing with good exploder performance. Not one of the attacks was hasty: not one was fired from extreme range or from a poor initial position. There was no "seaman's eye" background for shooting. Many long range, doubtful opportunities were passed up, in the sure knowledge that with the time available to us in the areas we should be able to use all torpedoes on good, calculated attacks. Developments during attacks #2, #5, and #6 resulted in the expenditure of more torpedoes than should have been used. But even with the firings as they stand, we should have accounted for seven ships instead of four.