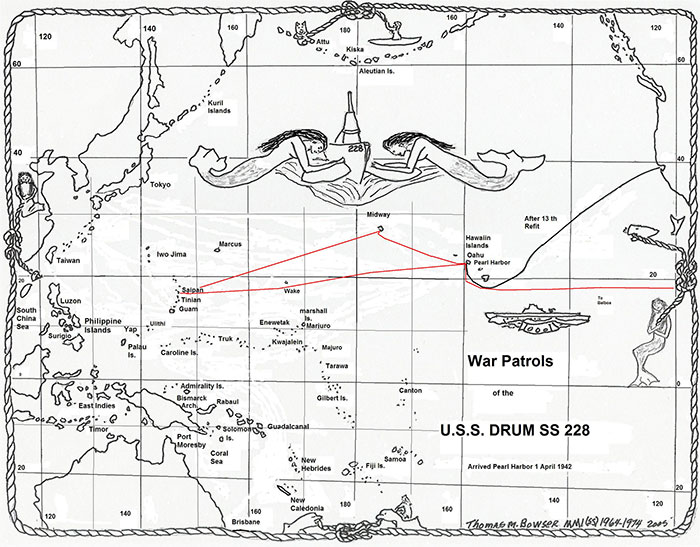 This is an unoffical war patrol report. What was to be USS Drum's 14th war patrol was not documented with an actual patrol report because the war ended before she arrived on station. The following account has been pieced together from various records found on board the Drum in February of 2009. This means that the information found below may be subject to correction! Thanks to Tom Bowser for sending me most of this information.

Sometime after arriving at Pearl Harbor on April 2, 1945 from War Patrol 13, the Drum was sent to Hunters Point, San Francisco, California, for a dry docking. She arrived at Hunters Point on April 11, 1945. While at Hunters Point, the Drum received some upgrades including a pair of 5 inch 25 caliber guns (one forward and one aft, which replaced the single 4 inch 50 caliber gun forward that was installed between patrols 4 and 5), SV radar on its own mast (replacing the SD), and her SJ radar was moved aft of the periscope shears.

Ken Henry, who served on the USS Archerfish (SS/AGSS-311) post WWII and maintains the Archerfish website told me this about Hunters Point and dual 5"/25 deck guns: "When Archerfish left the yards in Hunters Point between the 6th and 7th war patrols she had two deck guns. I have been told that was how ComSubPac was solving the problem of getting the larger guns to forward deployed areas in a timely manner. To cut down on the 'red tape' and all the excuses of why it couldn't be done, each boat leaving the yards took an extra gun when they headed west. When they got to the place where they were to drop off one of them for replacing a smaller deck gun on another boat, the CO had the choice of which one he wanted to keep... the one forward to chase things with, or the one after to cover his ass as he was being chased."

According to Gainey Maxwell, gunner's mate on the Drum during this patrol, the Drum kept the pair of 5"/25 deck guns until decommissioning.

Tom Bowser sent me this tidbit that he learned at the 2009 USS Drum reunion:

"We learned that the first crew member to have contact with a member of the opposite sex in the states when they returned was Stateside, a dog they had on board when they left Hunters point for the 14th patrol. When they were coming along side the pier in New York, Stateside saw a dog on the pier and jumped ashore before they could get a line over and educated the poor female dog about submarine crew members coming back from sea." 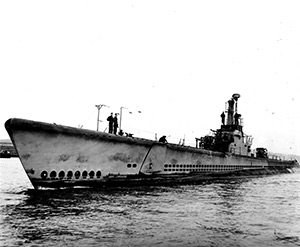 [This photo, Navy History #19-4-91672, was taken July 3, 1945 at Mare Island Navy Yard. You can see the pair of 5"/25 deck guns. It is assumed that Drum was getting ready to leave the west coast and went to Mare Island to get torpedoes. This photo later appeared in the 1972 commissioning program for the nuclear USS Drum (SSN-677). Thanks to Darryl Baker for sending this photo.]

[I found this photo on the NavSource website. The book reference given for the photo is The American Submarine by Norman Polmar. The caption says that this is the Drum leaving Hunters Point, San Francisco, California in July of 1945. Again, you can clearly see the pair of 5"/25 deck guns and the radar upgrades.]

Arrived at Balboa on September 16 and refueled. Underway for New York September 17.